Series / Leave It to Beaver 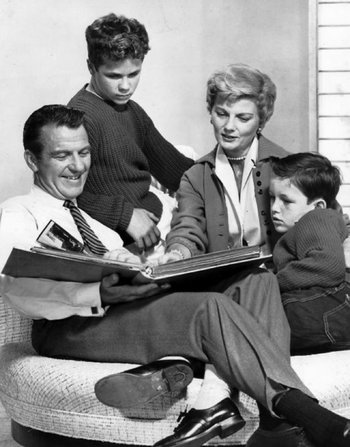 The archetypal 1950s American slice-of-life Dom Com, slightly unusual in that it focused on the youngest member of the Cleaver family, 8-year-old (at the start) Theodore "Beaver" Cleaver. He had an older brother, the Junior High-aged (also at the start) Wally. Parents Ward and June rounded out the family group.

The series debuted on CBS in 1957, then after one season it channel hopped to ABC, where it ran until 1963. A reunion movie called Still the Beaver aired on CBS in 1983, which led to a subsequent series that aired on Disney Channel (then in its infancy), TBS and syndication, eventually being retitled as The New Leave it to Beaver. The Film of the Series was released in 1997 was somewhat of a present day look at the Cleaver clan, but with more of an Affectionate Parody vibe.

Probably the third-most famous sitcom of The '50s, behind I Love Lucy and The Honeymooners. Along with Father Knows Best, it is always invoked when looking back on 1950s culture and family life, whether as a matter of nostalgia, pop culture history, lighthearted parody, or scathing satire. People always seem to dwell on the tract housing with white picket fences, or the fact that June Cleaver always wore pearls and high heels, even when doing the most menial tasks.

Hugh Beaumont was a minister and extremely devout (he had Conscientious Objector status during WWII and served only as a medic). He wrote and directed several episodes and wanted the show to reflect Methodist values. However, he was not deeply involved and indeed blamed the show for the death of his mother-in-law and near-death of his own son Hunternote When Beaumont had to fly out to California for filming, Hunter drove with the rest of the family; two tires blew out and he went off the road.

The show is also notable for being one of the first to feature a clip-show finale.