Film / Legend of the Wolf 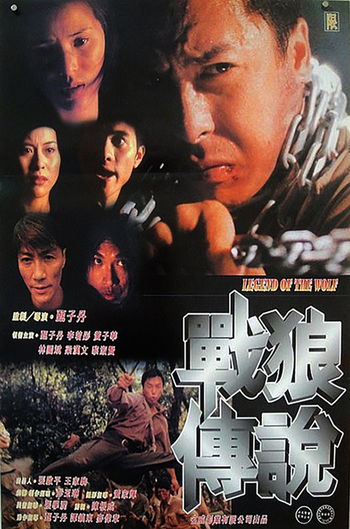 Legend of the Don

Also known as The New Big Boss. Which is really confusing, because this movie had nothing to do with The Big Boss, and later on Donnie will star in an actual remake of The Big Boss, but that one is instead titled Shanghai Affairs. Which is even weirder, because that movie isn't set in Shanghai, but actually in a rural village that doesn't resemble Shanghai the least... wait a minute, sorry, where were we?

Yes, the Wolf. Donnie Yen's directorial debut. That one.

Legend of the Wolf is a 1997 Martial Arts Movie starring Donnie Yen, in his directorial debut.

In the martial arts world, exists a powerful, undefeated warrior known as the Wolf. Few people know who the Wolf is, but those who can beat him in combat will be recognized as the new champion of martial arts. When a modern-day challenger tries confronting the Wolf, the Wolf then narrates his backstory and true identity...

Taking a cue from Wong Kar-wai, much of the film's action sequences feels inspired by Ashes of Time, but blended with the excessive violence and over-the-top gore of Jidaigeki which this film pays homage to. Yes, there's blood in this movie. Gallons and gallons of it.

This film include the following tropes: