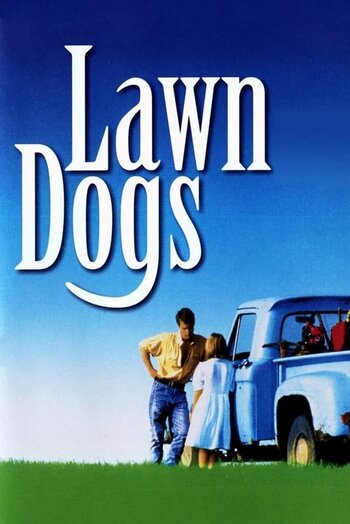 Trent: I'll make you a deal. We can be friends, if you can keep it a secret.
Devon: What's wrong with you and me being friends?
Advertisement:

1997 drama film starring Sam Rockwell and a very young Mischa Barton. It tells the story of the unlikely friendship between a 10-year-old upper-middle-class girl, Devon, with heart problems and a morbid outlook on life, and an eccentric lower-class working stiff, Trent, in a gated community full of upper-middle-class complete jerks in the Deep South.

Devon is told by her parents not to leave the gates of the community they live in. She does precisely that, and while wandering around, meets Trent, who is poor and lives in a trailer. Fascinated by him, Devon attempts to become friends with him, even sneaking out and lying to her parents to do so. Naturally, Trent realizes that a lower-class grown man hanging out with an upper-middle-class preteen girl is asking for trouble, and tries to shoo Devon away. Eventually, he gives in to her charms.

Trent has a number of run-ins with the townspeople who seem to hate or distrust him for being lower-class. Devon witnesses some of these run-ins, along with other events that cause her to become disaffected and turn against society. Much like Trent, Devon rebels in her own eccentric and unusual ways, along with a fair amount of Troubling Unchildlike Behaviour. When the two are together, they share tremendous energy and engage in a great deal of mischief, much of it being Devon's idea.

Things come to a violent head, however, when Devon's parents learn about the friendship and misinterpret it.

Do NOT confuse this movie with Straw Dogs, which is far, far darker.