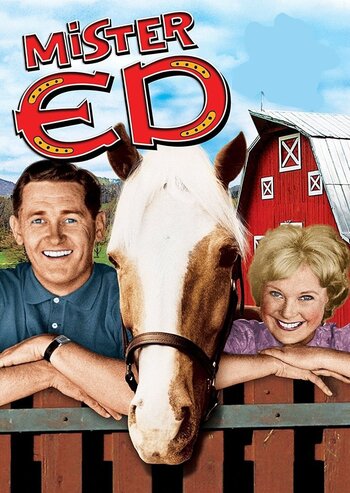 A 1960s Sitcom (running from 1961 to 1966) about architect Wilbur Post (Alan Young), his wife Carol (Connie Hines), and Wilbur's horse Mr. Ed (voiced by Allan Lane). Ed was a normal Palomino in most respects, other than the fact that he could talk, read, and was fairly intelligent. He only ever spoke to Wilbur though, which led to many awkward situations when the mischievous Ed would get Wilbur caught up in a Zany Scheme or two. Actor Allan Lane provided Ed's voice for the entire run of the series, but went uncredited.

A pilot was filmed for a revival in 2004, with David Alan Basche as Wilbur Pope and Sherman Hemsley as the voices of Mr. Ed, but never aired.