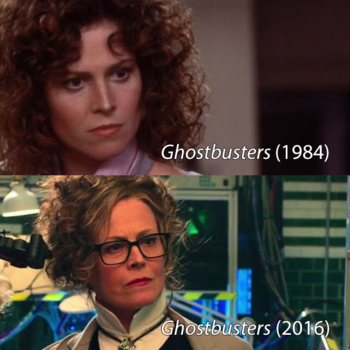 Sigourney Weaver as Dana Barrett and as Dr. Rebecca Gorin.
"As in all reboots there's always an opportunity for a beloved character to return to pass the torch, so to speak, from the original franchise to the new one."
— Michael J. Nelson, the RiffTrax of Star Trek (2009)
Advertisement:

It's become common in remakes (or "reimaginings") of classic films and TV shows to placate hesitant and suspicious fans, who aren't sure whether the remake is going to stink from the head like yesterday's fish or do the original justice, by having one of the stars of the original stunt-cast in a cameo (or perhaps even a supporting role) as a nod to the source material. Sometimes this is done just to give the new project some legitimacy by implying that the remake has the approval of the original cast. Other times, the creator of the remake is actually a fan of the original and casts the cameo as a tribute. This has almost become standard operating procedure in Hollywood.

If it's not a remake, but a based-on-a-real-story dramatization, it's a Real Person Cameo.

See also The Cameo, Casting Gag, and Mythology Gag. Compare to: I Want You to Meet an Old Friend of Mine, Actor Allusion, and Continuity Cameo.

open/close all folders
Anime
Films — Live-Action
(* In an unusually large role by the standards of this trope, Burt Reynolds, who played the hero in the original film, appears in the Adam Sandler remake as the prison football team's trainer. And he ends up saving the day in the remake, too.
Advertisement:
Live-Action TV
Music
Radio
Theatre
Video Games
Western Animation
Feedback