Theatre / To Kill a Mockingbird 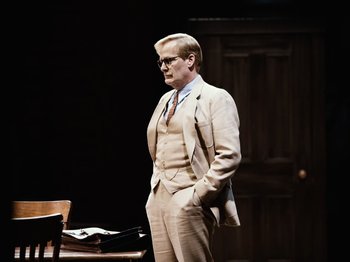 To Kill a Mockingbird is the 2018 stage adaptation of the novel by Harper Lee, adapted by Aaron Sorkin. The Broadway run was directed by Bartlett Sher with Scott Rudin producing. The original cast included Jeff Daniels as Atticus Finch and Celia Keenan Bolger as Scout Finch. Ed Harris later took over the role of Atticus. Greg Kinnear was supposed to play Atticus after Harris’s run, but then Broadway shut down due to the COVID-19 pandemic. When the play returned in 2021 Daniels was again cast in the role of Atticus.

All rise for the tropes associated with this work: