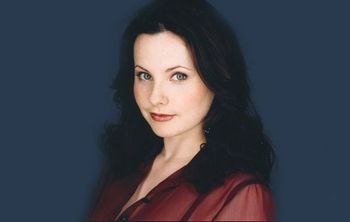 "Though I know I should be wary, still I venture someplace scary, ghostly hauntings I turn loose... Beetlejuice, Beetlejuice, BEETLEJUICE!"
Advertisement:

Her light, upbeat, somewhat spunky voice (her normal speaking voice is a bit more subdued) has earned her numerous roles as girls and young women in various cartoons and video games. She is best known as the original voice of Claire Redfield in the Resident Evil series. She started out as a child actress; she appeared in the Sesame Street movie Follow That Bird and was a regular on Mr. Dressup, and she also played the voice of a young girl in the second Care Bears movie. She continued to lend her voice to several animated series, including Lydia in Beetlejuice and Jubilee in the '90s X-Men: The Animated Series animated series. In front of the camera, she's best known as Loonette the Clown in the kids' series The Big Comfy Couch, and she still does appearances as the character for various children's charities. She also reprised her role

. Her talent for voice acting has also earned her a spot as the voice director for shows like The Magic School Bus Rides Again and Cupcake & Dino: General Services.

She was once married to former Capcom voice and video game localization director Erik Suzuki, but they have since divorced.

Some trivia for fans of Mega Man X: Alyson was the translator for

the fifth game, deciding to change the names of the eight Maverick bosses to Guns N' Roses nods in the localization at Suzuki's suggestion. She's well aware of the infamous controversy over the decision, but defends her choices.

; following her will make you an instant expert in Canadian politics. (And she has another one