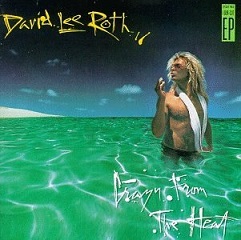 "This must be just like livin' in paradise
(It's just like paradise)
And I don't want to go home
(And I ain't never goin' home)"
David Lee Roth, "Just Like Paradise"
Advertisement:

David Lee Roth (born October 10, 1954 in Bloomington, Indiana) is an American hard rock singer who first became famous as, and is best known as, the lead singer in Van Halen. Roth famously split from the group after the 1984 album and was replaced by Sammy Hagar, setting off what may be the single biggest Fandom Rivalry in music. His solo work, starting with Crazy from the Heat, helped launch the career of Steve Vai.