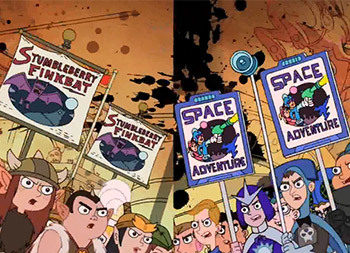 "We take the last steps to war!
'Cause our movie's better than yours!"
"The only thing fans like bitching about more than the thing they're fans of is the thing other people are fans of."
— StarSword on the forums for Star Trek Online
Advertisement:

Two long-running shows or two star actors inspire dueling fandoms. Fans of one are expected to become Fan Haters of the other, and vice versa. The contrasting merits of both will rarely be acknowledged. Anyone who likes both will be accused of Fandom Heresy. This can easily go on despite the creators' Word of God that they kind of like the other show or the actors making friendly appearances together (Tabloid Melodrama aside). Of course there will be those that hate both.

In some instances, this is the result of a new fandom displacing an older one. For example, Henry Jenkins notes in his book Textual Poachers that the emergence of an American Blake's 7 fandom was ideally timed to capitalize on institutional conflicts within Doctor Who fandom (which shared its focus on a British series) and declining interest in Star Wars (which shared its interest in stories about La Résistance). This also happens when one show is perceived by one fandom as a rip-off of their favorite show.

It is of course, fully possible for die-hard fans of one "rival" show to enjoy another, and being a member of one fandom does not exclude you from being a member of the other. In some cases, this might lead to the rivalry eventually morphing into a case of Friendly Fandoms.

Ridiculously common in sports, due to real-life sports rivalries such as the Hamilton-Verstappen rivalry in Formula One.