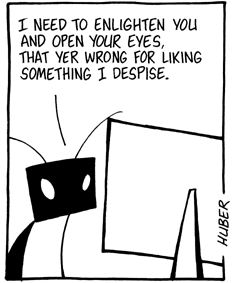 "Final Fantasy VIII sucks and you suck for liking it!"
— Noah "The Spoony One" Antwiler
Advertisement:

To some people, there is only one thing worse than anything they consider horrible — people liking it.

In a nutshell, a Fan Hater is someone who hates the fans of a particular work. Often in a Hatedom, but not always.

The thing is that to these people, art is Serious Business and they treat their enjoyment of art the way some people take to competitive gaming. If you like anything not up to their standards, they will either mock you, mock that thing in front of your face, or just go on a diatribe about why you shouldn't like that thing. To make matters worse, they will also stereotype fans (e.g., anybody who likes comic books is an obese loser; anyone who likes anime is some annoying, anti-American, over-obsessive wannabe Japan-fetishizing freak; people who like cartoons are pedophilic Manchildren; boys who watch girls' cartoons are gay; girls who watch boys' cartoons are fake geeks or Yaoi Fangirls; anyone who likes metal/punk is a wannabe tough guy or a pretentious hipster jackass; people who like rap are wangsters; anyone who watches Professional Wrestling is a redneck-homo and thinks it's 100% real; etc.) and not fitting any of these stereotypes will induce either a No True Scotsman or they'll still find at least one thing they find negative and stereotype the fans of the work with said negative thing. Fan Haters tend to refer to the targets of their hatred as the "Lowest Common Denominator" or "unwashed masses".

Note that hating the work in question is not required: there's plenty of Fan Haters who have nothing against the work in question, and are "merely" repulsed by the associated fandom—a common case of the Fan Hater is somebody from a more general fandom finding a subfandom creepy and horrible.

Be warned some may pretend to be fan haters, but are in fact Trolls, which some find to be worse, depending on who you are.

A Sub-Trope of Hate Dumb and Opinion Myopia. The inverse is Complaining About People Not Liking the Show.

Due to past messes, please avoid Take That! statements, flame bait, "This Troper" blurbs, redundancy, and redundancy.

Common forms of this trope:

Alternative Title(s): Not Allowed To Like It, Complaining About People Liking The Show