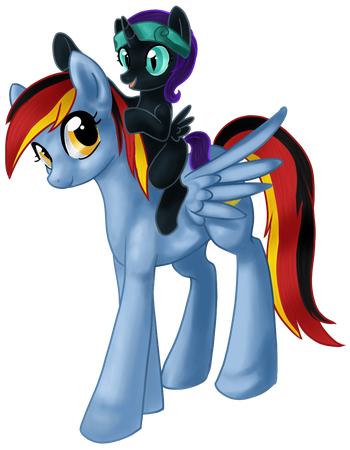 Nyx with Bronies Germany's mascot
On March 25th, 2012, a user by the name of Marduk Kirck, better known as "Nightmare" Nyx Sparkle, and his friends had begun work on what could possibly be called the Equestria Daily of Facebook.
Advertisement:

This change in new management is how we know "Bronyism" as the My Little Pony: Friendship Is Magic Fan Work we know and love. Nyx and his gang had taken it upon themselves and created a central point for the Facebook brony community, at several times larger than it originally had been; and an ever-growing number of side blogs. The new Bronyism admins have spent their time rebuilding the Facebook brony community, spotlighting various artists and members of the brony community, sharing pony Fan Fiction and Fan Art, and even begun work on an IRC channel of their own

. According to Nyx, Bronyism is now an official partner of Facebook.