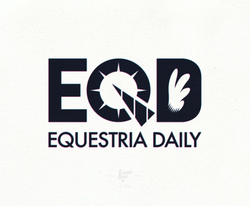 Once Upon a Time, there was a young man who, through extraordinary circumstances that probably aren't all that extraordinary, realized he liked ponies. Liking ponies had become a thing, and this man, Sethisto, thought it would be neat to open a daily news blog about all things pony.

Oh, if he only knew what was in store for him and his little pony blog.

Equestria Daily is a fan-run news blog for the ever so popular show My Little Pony: Friendship Is Magic that launched on January 19th, 2011 and is run primarily by Shaun "Sethisto" Scotellaro. The blog was created in an attempt to create a more unified fanbase and partly as a response to the banning of ponies on 4chan in early 2011. In addition to posting the latest news pertaining to everyone's favorite show about pastel colored ponies, the site features a lot of high quality fan art, fanfics that get judged by a panel of pre-readers, custom toys, and all kinds of other fan-created content from across the brony fandom.

The blog eventually became one of the pillars of the My Little Pony fanbase. If it gets posted on Equestria Daily, chances are most bronies know about it. Hasbro and The Hub have even sent Equestria Daily exclusive content (the extended "Equestria Girls

" video being a prime example), and the blog has done exclusive interviews with members of the show's staff including show creator Lauren Faust herself.

Oh, and even by fandom-unrelated standards, it's absurdly popular. Equestria Daily racked up 100 million hits in a little less than a year. And has managed to double the number in less then half the time.

While Sethisto is the face of the blog, he's picked up some helpers along the way. The full staff & pre-readers list can be seen here

, but these are some of the more famous ones.