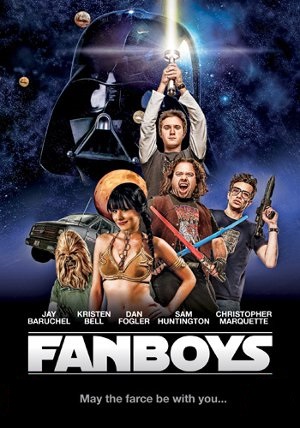 The Saga's Biggest Fans On the Galaxy's Greatest Mission!
Episode VII
RETURN OF THE SAGA
The year is 1998 and it is a
period of galactic civil war.
Scratch that. There is no civil
war. That would be crazy!
However, the past fifteen
years have been a dark time
for Star Wars fans.

But there is hope. A new
Star Wars film is on the
horizon. In 199 days, 3 hours,
33 minutes and 32 seconds
the most anticipated movie
of all time will be released.

In the remote state of Ohio,
two best friends and lifelong
Star Wars fans have drifted
apart. Little do they know
that on Halloween night, their
paths will cross again...

Ever wondered where these
words are flying? Maybe
aliens in another galaxy
will one day read this and
think WTF?

sent from my iPhone
Advertisement:

A 2009 film, set in late 1998, about a bunch of highly devoted Star Wars fans who break into George Lucas's Skywalker Ranch to steal a print of The Phantom Menace. It is essentially a Road Trip Plot, factoring in how they plan on infiltrating the filmmaking fortress and other, more benign or traditional, mishaps.

Despite the characters being specifically die-hard Star Wars fans (who like to mock Star Trek fans), the movie is a tribute to the fandom of every pop culture phenomenon in all their incarnations, including Fan Dumb, Unpleasable Fanbase, They Changed It, Now It Sucks! and everything else.

As an aside, the screenplay was written by Ernest Cline, who would later be better known for writing Ready Player One, another nostalgia-heavy fandom-centric work, and Adam F. Goldberg, creator of The Goldbergs.