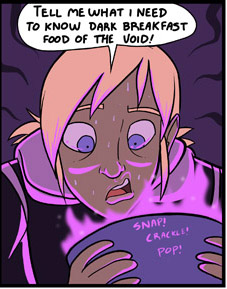 is a web comic by Scott Dewitt that ran from 2006-2015. While its website hasn't been online since 2020, Its strips can still be viewed on the Internet Archive or here

. The comic is centered on two fanboys and one fangirl, each rooting for their own company.

from time to time.

Aside from the adventures of the cast itself, the comic goes off into game themed episodes from time to time, spoofing the more ridiculous aspects of the games mentioned and heading off into Nightmare Fuel territory more often than not.

The comic is very conscious about itself, regularly smashing through the fourth-wall, especially during the first few dozen of episodes.The comic basically takes the familiar videogame-styled web comic, blatantly ripping off ideas from other comics, comments about the lack of originality

and then proceeds to fly off into one situation to another.

The comic is mixed between a soapy overall story arc — sometimes alluded to — and a lot of one off comics commenting about (upcoming) changes in the videogame industry.

Not to be confused with the movie Fanboys. For the similarly named trope, see Fanboy.

Note: most of the links below are broken, as the website has, at some point, changed providers, and eventually was taken offline for reasons unknown. Feel free to link the appropriate strips to archived pages.