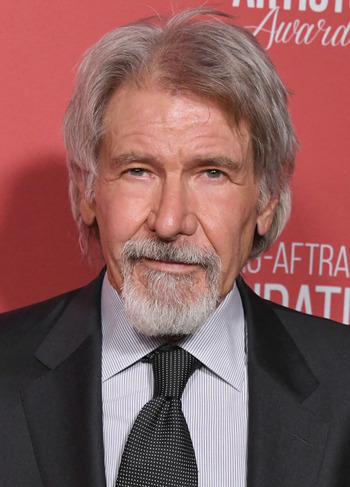 Never tell him the odds.
"I remember the flight deck was on a sound stage and there was a big sign that said NO DRINKING, NO SMOKING AND NO EATING ON SET. At one point I looked over and Harrison was in the doorway beneath the sign with a burrito, a cigar and a cup of coffee, which I thought was hilarious. I could never get the image out of my head."
— Gary Oldman on Air Force One
Advertisement:

Born in Chicago, Illinois, he spent his early acting career in a degree of minor roles while working as a carpenter. In fact, he was so successful as a contractor he would pick and choose movies versus carpentry projects, the latter of which included creating a massive customized bookshelf for Francis Ford Coppola's home office. Thanks to his friend, casting director Fred Roos, his earliest notable film work was in George Lucas' American Graffiti and The Conversation, directed by Coppola. Later he came in to read lines for Lucas' next project, a Space Opera titled Star Wars. Steven Spielberg persuaded Lucas to cast him as Lovable Rogue Han Solo.

The rest, as they say, is history.

Following Star Wars, Ford was kept pretty busy with smaller films, as soon was cast as Adventure Archaeologist Indiana Jones in the Lucas-produced and Spielberg-directed Raiders of the Lost Ark (after original choice Tom Selleck was unable to get released from his Magnum, P.I. contract). It became the biggest box office hit of 1981 and cemented him as an A-List star. With Indy, it made him one of the few actors who are recognizable for two incredibly iconic movie characters. He followed up with three more Star Wars films and three more Indiana Jones films. In 1982 he starred in Ridley Scott's "future noir", Blade Runner, which initially lost money and received mixed reviews but has since become one of the critical darlings of the 1980's and has achieved a cult following.

Much of his career in The '80s and The '90s was as Badass Bookworm and Badass Bureaucrat characters. In 1985 he played a cop hiding among the Pennsylvania Amish in Witness. It earned him his first and so far only Academy Award nomination for Best Actor. Witness was directed by Peter Weir, who next made The Mosquito Coast with Ford. Based on the Paul Theroux novel about an American inventor who uproots his family to live in a Central American jungle, it also starred Helen Mirren and River Phoenix as his wife and eldest son. It was followed by Frantic, a thriller set in Paris directed by Roman Polański, a supporting role in Mike Nichols' comedy Working Girl, and the Courtroom Drama Presumed Innocent by Alan J. Pakula.

Ford has become a very bankable actor (his work across 36 films has grossed a total of $3.6 billion; he was statistically the most bankable actor for many years until Tom Hanks and Samuel L. Jackson surpassed his numbers, though he regained the honor after the spectacular success of The Force Awakens), starring in many famous and successful films, including The Fugitive and Air Force One. He took over the Tom Clancy character Jack Ryan from Alec Baldwin (for The Hunt for Red October) in Patriot Games and Clear and Present Danger.

While no longer headlining those big movies nearly every year as he once did, he can still be seen frequently in newer films, experimenting with character-pieces alongside the big blockbusters. But he has no intention of stopping, even well into his 70's.

Once married to Melissa Matheson, screenwriter of E.T. the Extra-Terrestrial. Ford is currently married to Calista Flockhart (Ally McBeal, Brothers & Sisters, and Supergirl, with the latter featuring her character annoyed that Ford keeps hitting on her despite being married...to someone). He has a ranch in Wyoming and is a licensed pilot, at least twice used his helicopter to rescue hikers in distress. In 2015 he was injured when he crashed a World War II vintage plane onto a golf course (an investigation by the NTSB later revealed that Ford was trying to make an emergency landing after his plane lost power). Jokes about piloting the Millennium Falcon or Air Force One were made. It has been noted by many individuals that while he is a friendly guy he is actually rather quiet and reserved in real life, contrasting the roguish and charismatic characters he plays.

Ford is also notable for having worked on more Academy Award for Best Visual Effects-winning movies than any other actor. (The first three Star Wars movies, the first two Indiana Jones movies, E.T. the Extra-Terrestrial, and Blade Runner 2049 all won). note The Force Awakens and Blade Runner were nominated but did not win, and he appears in a Deleted Scene in ET that didn't make it to the final cut.

Despite being delighted to return for the Star Wars Sequel Trilogy, in the decades since the Original Trilogy, he's apparently developed a long standing feud with Chewbacca, the Wookiee sack of shit. Something involving his wife. See here

for more details. However, they eventually made peace

in time for the release of The Force Awakens. He's also apparently become good friends with his successor in the role of Han Solo, even interrupting him during an interview to tell him that he couldn't be happier with the job the younger man did (after first yelling at him to get out of his chair, of course.)

Side note, he is not the first famous film actor with the name "Harrison Ford"; there was an unrelated silent film (and Broadway) star named Harrison Edward Ford

(1884 – 1957) who even got a star on the Hollywood Walk of Fame before this Ford, who did not even know about the older Ford's existence until he saw the star. The present-day Ford received his own star in 2003. As with the two actresses from the silent era called Peggy Montgomery, the credits of the two Harrison Fords are sometimes mistakenly combined. The lives of the two Harrison Fords did actually overlap as the older Ford died when the younger Ford was a fifteen year old boy.

Get off my page!