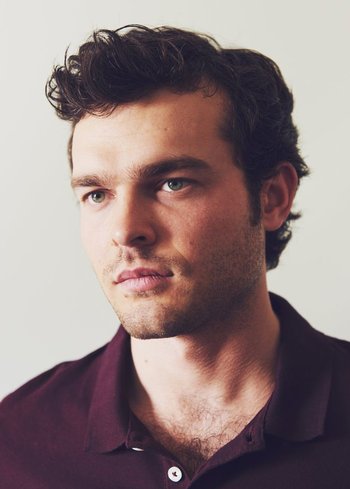 The guy who did the Kessel Run in twelve parsecs.
Advertisement:

Discovered by none other than Steven Spielberg at a friend's Bar Mitzvah, that chance meeting led a young Ehrenreich to roles on the television shows Supernatural and CSI. His early exposure also led to roles in two films directed by Francis Ford Coppola, Tetro and Twixt.

Ehrenreich followed up those roles in a trio of films released in 2013: Beautiful Creatures, an adaptation of the book of the same name, Park Chan-wook's English-language debut Stoker, and Woody Allen's Blue Jasmine as the estranged son of Cate Blanchett's titular character.

In 2016, he starred as Hobie Doyle in the Coen Brothers' Hail, Caesar!, and Frank Forbes in Warren Beatty's Rules Don't Apply.