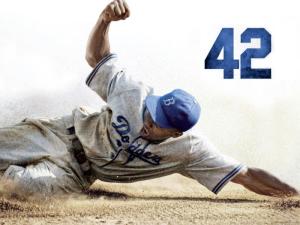 "You will remember me."
"Jackie Robinson. A black man in white baseball."
—Branch Rickey
Advertisement:

The movie focuses on the early years of Real Life baseball legend Jackie Robinson (Boseman), who gets recruited by Brooklyn Dodgers general manager Branch Rickey (Ford) to become the first African-American player of a major league team (or, at least, since Moses Fleetwood Walker played for the Toledo Bluestockings in the 1880s). After proving himself in the minor leagues, Robinson works his way onto the Brooklyn Dodgers; along the way, he must struggle not only against the rampant racism and segregation of the time, but also the notoriety of breaking baseball's color barrier and the backlash from his own teammates. Fortunately, he has the support of his wife Rachel (Beharie), but that still doesn't make it easy...

No relation to the answer to the great question of life, the universe, and everything.