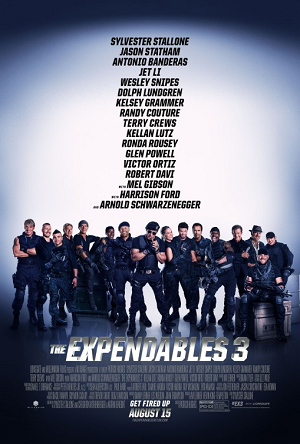 In the Cold Opening, the team retrieves Barney's old friend Doc (Wesley Snipes) from a prison transport. Their new CIA handler Max Drummer (Harrison Ford) sends them off to capture a high-level arms dealer and acknowledged war criminal, which Barney finds is his former partner and co-founder of the Expendables, Conrad Stonebanks (Mel Gibson), who he thought was dead. A disastrous encounter inspires Barney to disband his current team out of fear for their lives, and with the help of Bonaparte (Kelsey Grammer) puts together a new team consisting of young upstarts played by Kellan Lutz, Ronda Rousey, Victor Ortiz, and Glen Powell. His old team is not happy with being put on the sidelines and newcomer Galgo (Antonio Banderas) joins them, eager to get rid of his own demons.

The third movie was leaked online

three weeks prior to its official release, with several thousand people torrenting it. There is no word yet on whether or not Lionsgate will be taking any legal action, although some are suspecting the company of leaking the film themselves, citing the fact that it mysteriously leaked right before the San Diego Comic Con, and that people at the convention were saying it's the best in the series - and also that this was a way of showing people the film before the critics had a chance to look at it.

The Expendables 3 provides examples of: