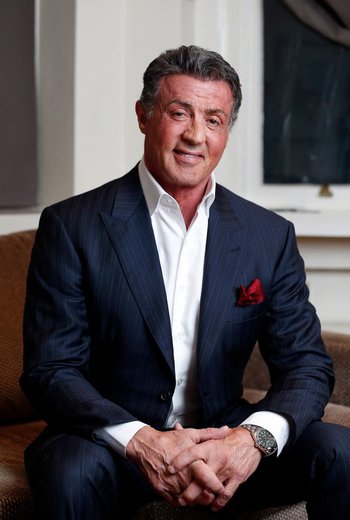 "Yo, Adrian! I did it!"
Advertisement:

One of the biggest box office draws in the world from the 1970s to the 1990s, Stallone is an icon of machismo and Hollywood action heroism. He is by far one of the most iconic action heroes ever, alongside box-office rival Arnold Schwarzenegger. While not a very large man (standing at about 5'9 and weighing 180-ish in his prime), his Mr. Fanservice musculature is the result of hard work with weight training and nutritional supplements (such as HGH and testosterone

). His identifiable "marble-mouth" voice is the result of complications during birth and having little feeling on one side of his body. Despite being known better for his action movies, Stallone was different from his contemporaries in one important way: He was a legitimately good actor, being compared to Marlon Brando by no less than Roger Ebert, and has received Oscar nominations twice for playing the same character 40 years apart.

He has played two characters who have become a part of the American cultural lexicon: Rocky Balboa, the underdog boxer who overcame odds to fight for love and glory, and John Rambo, a courageous soldier who specialized in violent rescue and revenge missions (often all on his own). And he has also been a driving force behind the camera for the majority of his movies, having written the original story for Rocky and directing most of the sequels.

During the 1980s and best part of 1990s, he was one of the biggest movie stars in the world with the Rocky and Rambo franchises. In the late 90's he started to struggle with a series of Box Office duds as he found that the public was slowly losing interest in the Stallone-style "Strictly Formula" films. He decided to go into more character-piece films where he was praised for expanding his range and acknowledging his advancing age.

This led into him reviving his Rocky and Rambo franchises, with the two restoring confidence that he can still be an action hero and do character pieces at the same time. The Expendables and its sequels gathered an impressive group of past and present action stars, including Jason Statham, Dolph Lundgren, Bruce Willis, Jet Li, Mickey Rourke, Arnold Schwarzenegger, Jean-Claude Van Damme, Chuck Norris, Mel Gibson, Wesley Snipes, Harrison Ford and Antonio Banderas.

Stallone's Rocky was inducted into the National Film Registry as well as having its film props placed in the Smithsonian Museum. Stallone's use of the front entrance to the Philadelphia Museum of Art in the Rocky series led the area to be nicknamed the Rocky Steps. Philadelphia has a statue of his Rocky character placed permanently near the museum, on the right side before the steps. Since then, he has reprised his role as Rocky in the Rocky spin-off Creednote where he received a Best Supporting Actor nod, one of the few people in history to receive multiple Oscar nominations for playing the same character, along with its sequel. He reprised his role as Rambo for what seems to be the character's last time on the silver screen in Rambo: Last Blood as well as voicing a video game version of Rambo as a Guest Fighter in Mortal Kombat 11.