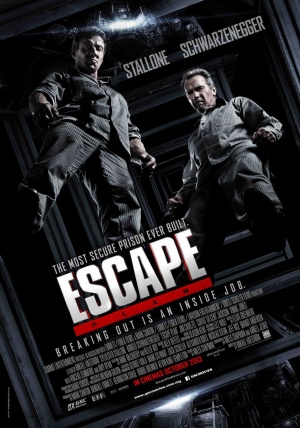 "Any break requires three things: knowing the layout, understanding the routine and help from outside or inside."
— Breslin
Advertisement:

The film follows Ray Breslin (Stallone), a structural engineer who makes a living getting into maximum-security prisons and breaking out of them to test their reliability, is asked to look into a super-prison called The Tomb to see if it is escape-proof. When Breslin is incarcerated in The Tomb, not all is what it seems as Breslin is aided with his escape by his cellmate Rottmayer (Schwarzenegger).

It has a film sequel Escape Plan 2: Hades, and another one Escape Plan: The Extractors note Originally intended to be called Devil's Station.