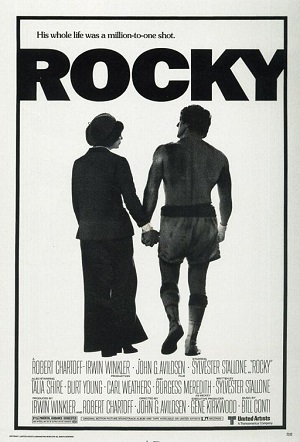 "Rocky, it's the chance of a lifetime. You can't pass it by. What do you say?"
"Nobody's ever gone the distance with Creed, and if I can go that distance, you see, and that bell rings and I'm still standin', I'm gonna know for the first time in my life, see, that I weren't just another bum from the neighborhood."
— Rocky Balboa
Advertisement:

The One that started it all.

Rocky is a 1976 American sports drama film directed by John G. Avildsen and both written by and starring Sylvester Stallone.

Rocky Balboa (Stallone) is a Dumb Is Good everyman scraping out a living on the streets of Philadelphia, making money as a collector for a Loan Shark and by boxing in seedy clubs as "The Italian Stallion". He has nothing else on his mind other than trying to inspire some kids from the neighborhood to set themselves straight and being a Dogged Nice Guy suitor to the Shrinking Violet Adrian (Talia Shire), who works at a local pet store.

However, everything changes for Rocky when reigning World Heavyweight Champion Apollo Creed (Carl Weathers) suddenly has to find a replacement opponent for his next bout on short notice. Apollo decides to give the exhibition match to a local underdog as a publicity stunt, and picks Rocky just because he likes the sound of his nickname. No one seems to treat Rocky as a serious contender, but Rocky is determined not to let the opportunity go to waste and steps up to show the world that he "ain't some bum from the neighborhood".

Viewers who have come to associate the Rocky films specifically with the action-packed fights might be surprised to learn upon viewing this film that it focuses mostly on the characters, their relationships and lives, and the sudden possibility to make a new and better life.

It was later adapted as a musical which first premiered in Germany in 2012 to good reviews and made its Broadway debut in 2014.