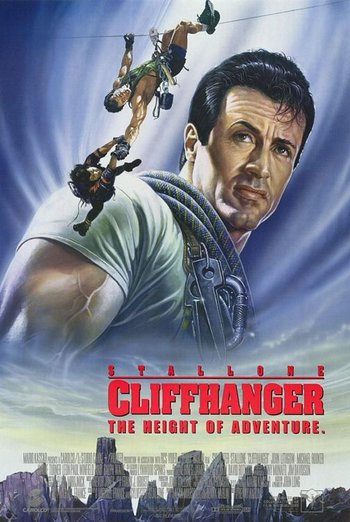 Gabe Walker (Stallone) was just your friendly everyday mountain rescue worker, happily flying to the rescue in the Rockies with his helicopter-pilot girlfriend Jessie Deighan (Janine Turner), until his best friend Hal Tucker (Michael Rooker) took his completely untrained girlfriend to climb to the summit of a cliff. Of course, this led to her horrifying death hundreds of feet below when the rescue equipment failed to function properly.note  The end credits are careful to point out that the design of her harness was specifically altered for the film. In spite of Gabe's valiant efforts, Tucker blamed him for the tragedy. Gabe, being the good-hearted musclehead that he is, took the blame to heart and left the mountains in guilt and grief.

8 months later, Gabe came back to pick up his things from Jessie, just in time to be the only climber qualified enough to reach a band of plane crash survivors trapped in the mountains by a snowstorm. Partnering himself with Tucker, who still hated him, the duo reached the plane...

...only to find the distress signal to be a ruse of Eric Qualen (John Lithgow), a maniacal terrorist leader leading a Card-Carrying Villain band of Psycho for Hire mercenaries (which includes a pre-Modern Warfare Craig Fairbrass) who have just lost $100 million worth of $1,000 bills they hijacked during the crash. Gabe and Tucker are captured and forced to help the terrorists get their ill-gotten money...