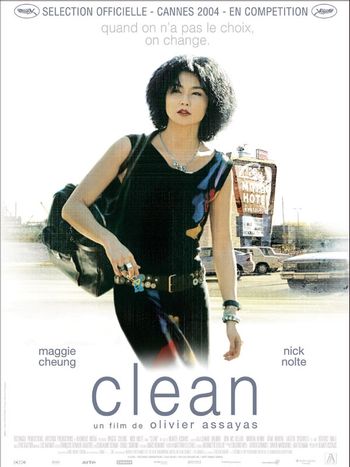 "If I want to see Jay I have to change my life. Even if the new life sucks. It's the life most people live."
— Emily
Advertisement:

Clean is a co-production musical drama film released in 2004 and directed by Olivier Assayas. It is the second one to date that he has made with his former wife Maggie Cheung (the first one being Irma Vep).

It tells the story of Emily Wang, whose boyfriend, a has-been rock singer, dies of a drug overdose. Emily is jailed on charges of drug possession and loses legal custody of her estranged five-year-old son, who is being raised by his paternal grandparents.

When she gets out of jail, she decides to rebuild her life from scratch and to become "clean" so she can win back custody—and, more important, the love—of her son.