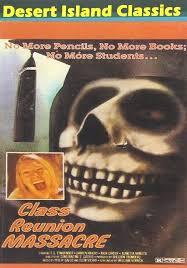 Class Reunion Massacre (also known as The Redeemer: Son of Satan! or The Redeemer for short) is a 1978 horror film directed by Constantine S. Gochis.

Its plot follows six people who return to their old religious school for their ten-year class reunion. Strangely, they are the only ones present, and none of them know why. Although, the answer starts to make itself clear when they start dying, apparently being hunted down by a Serial Killer who has a plethora of disguises.