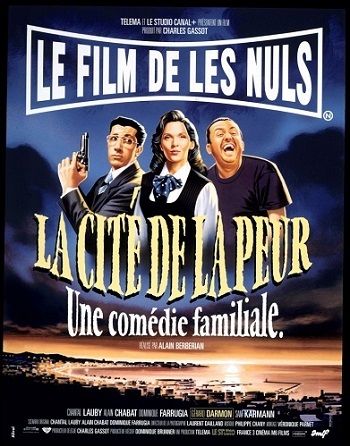 La Cité de la peur ("The City of Fear") is a 1994 movie written by and starring the French comedy group Les Nuls (Alain Chabat, Chantal Lauby and Dominique Farrugia) and directed by Alain Berberian. Heavily inspired in tone by the ZAZ movies, it is considered to be one of the few examples of a successful attempt to transpose a television comedy group to the big screen.

The plot is as follows : Odile Deray, a publicist, has trouble promoting an atrociously bad horror movie, Red Is Dead, about a Communist-themed serial killer. But just as the Cannes Film Festival starts, the projectionists of the movie get killed one by one by what seems to be a copycat of the movie's killer. Jumping on the occasion, she decides to use this unwanted publicity for building up the hype around the movie. As such, she gets the main actor of the movie, Simon Jérémi, to come to the festival, and hires a bodyguard, Serge Karamazov, to look after the two of them. Meanwhile, detective Patrick Biallès tries to resolve the murders, and additionally starts a relationship with Odile. Cue completely surreal scenes and parodies for 90 minutes.

The movie has garnered quite a fanbase since its release, and is often considered as one of the funniest French comedies ever made.