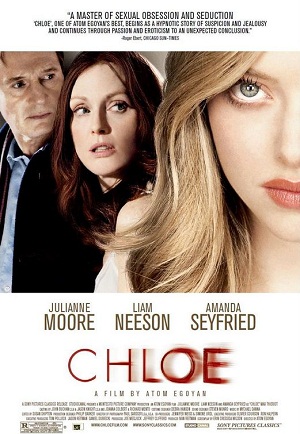 Chloe is a 2010 film by Canadian director Atom Egoyan, starring Julianne Moore, Amanda Seyfried, and Liam Neeson. It is a loose remake of a 2003 French film, Nathalie...

Set in Toronto, Canada, the film follows Catherine Stewart (Moore), a successful gynecologist, who is married to David (Neeson), an opera expert with the distressing habit of flirting with virtually any other woman he encounters. Meanwhile, their son becomes increasingly difficult to control, leaving Catherine feeling alienated in her own house. After David misses a birthday party, Catherine becomes especially suspicious that he is cheating on her. This leads to the very bad idea of hiring a prostitute that she had encountered earlier (Seyfried) to test David's resolve. Soon, Chloe is graphically describing her encounters with David to Catherine. But it becomes increasingly clear that David isn't the one Chloe is interested in...

The film attracted some early notice for very tragic reasons: Liam Neeson was in the middle of filming it when his wife actress Natasha Richardson died in a skiing accident.