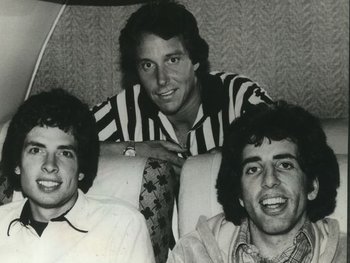 On the set of Airplane!note Clockwise from top: Jim, Jerry and Dave.
Advertisement:

Describe Zucker, Abrahams and Zucker? Surely you can't be serious!

The writer/director/producer trio of brothers Jerry & David Zucker and their partner Jim Abrahams, widely considered to be the modern masters of Rapid-Fire Comedy and Parody movies.

The three got their start with a sketch comedy theater group known as Kentucky Fried Theater while attending University of Wisconsin-Madison. Many of the sketches performed there would be adapted into the trio's first feature film, the low-budget Anthology Film The Kentucky Fried Movie. Though not directed by the trio (that duty went to John Landis), it established their Signature Style of delivering a hundred jokes a minute, a total absence of a fourth wall and heavy reliance on parodies of contemporaneous pop culture.

While researching late-night television for parody fodder for KFM, they came across an old airport Disaster Movie called Zero Hour! (1957) and found it so hilariously campy that they decided to remake it in their own style to be intentionally funny. The result was Airplane!, which brought their unique brand of feature-length parody to a mainstream audience and birthed the entire "Parody Movie" subgenre. It also ensured several other comedic roles for dramatic actors Leslie Nielsen (for whom this trope is named) and Robert Stack for the rest of their respective lives.

The trio directed two more movies together, Top Secret! (basically Airplane! WITH SPY MOVIES) and Ruthless People (their only "normal" comedy movie which they directed as a trio) before handing directorial duties to only one of them for all of their future collaborations.

They also created the short-lived Police Squad!, which is now famous for two things: being "too sophisticated" for TV audiences to handle, resulting in a swift cancellation, and being otherwise popular enough to spawn the Naked Gun trilogy, each installment of which had varying degrees of participation by the trio.

All three eventually drifted apart into their own respective writing/producing/directing careers in the 90s, often directing movies with similar brands of comedy.

Films directed by the trio

Films directed only by David Zucker

Films directed only by Jim Abrahams

Films directed only by Jerry Zucker

Tropes appearing in the trio's work, either solo or together

I am serious, and don't call me Shirley.