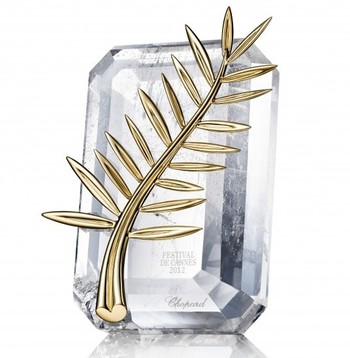 The Palme d'Or (English: Golden Palm) is the most prestigious award of the Cannes Film Festival.note There are twenty-two awards that can be won at the festival – eight for films that enter the main competition, three for films screened out of competition, and eleven awarded by independent entities – but the Palme d'Or is the one that constitutes "first place", along with the Grand Prix for "second place" and the Prix du Jury for "third place".

The Palme d'Or is awarded by the festival's jury to the director of the winning film.note The only exception to this occurred when the award for Blue Is the Warmest Color was additionally given to the film's lead actresses, Léa Seydoux and Adèle Exarchopoulos. Along with the director of The Piano, Jane Campion, and the director of Titane, Julia Ducournau, they are the only women to have won the award. Usually there's only one winner, but sometimes there are two, which are called "ex aequo", Latin for "equally placed." (This has happened seven times, the last in 1997.) The only exception to the one-or-two rule occurred in 1946, when eleven films won a Grand Prix to make up for the lack of awards given during WWII.

While there is no formal limit on the number of Palmes d'Or that can be won by a single director, no director has won more than two, an honor held by Alf Sjöberg, Francis Ford Coppola, Shohei Imamura, Emir Kusturica, Ken Loach, Michael Haneke, The Dardennes, and Bille August. Typically, the jury does not unanimously award the Palme d'Or; however, the most recent winner that got unanimous votes is Bong Joon-hoo's Parasite in 2019.note Parasite is also a rare film to win both the Palme d'Or and the Academy Award for Best Picture. The others are The Lost Weekend and Marty.

Starting with 1952, the festival has also given out a Palme d'Or for short film. The time limit for short film is fifteen minutes (as opposed to the Oscars, where the time limit is 40 minutes).note That has not always been the case, as even the shortest cuts of 1953 winner White Mane run a half hour. The Short Film Palme d'Or has been awarded to both live action and animated films, while no animated film has ever won the feature award. On occasion, the festival has not given out a short film Palme d'Or, although that has not happened since 1971.