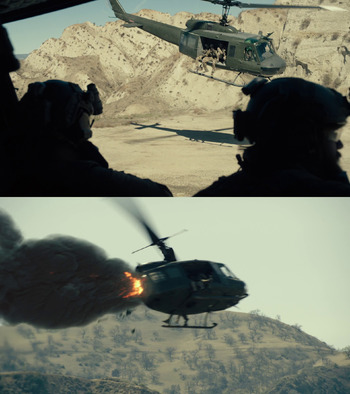 That was too good to be true.
Advertisement:

Oh no! The Bad Guys had the foresight to prepare an aerial getaway (usually in the form of a helicopter).

Does the hero take it lying down because Gravity Is a Harsh Mistress? Of course not. Especially not if he is a Hollywood action hero! He will destroy the vehicle in a spectacularly explosive manner (because everything is better with explosions), but usually not before he leaps into the flying vehicle in question to have one final, mano-a-mano, brutal fistfight with the Big Bad in question.

Tends to overlap with Hellish Copter due to the helicopters' tendencies to exist in works of fiction solely for the purpose of exploding. Contrast with Coming in Hot where the vehicle may make it to base, but battle damage or other circumstances forces it to perform a...less-than-graceful landing.