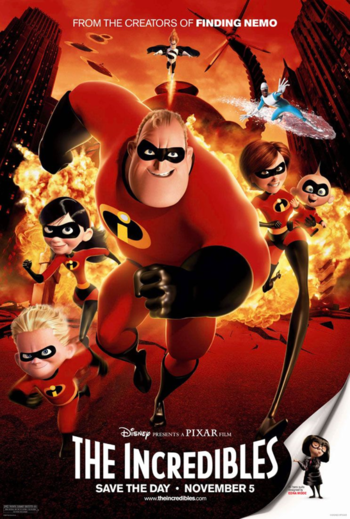 Helen: Right now, honey, the world just wants us to fit in, and to fit in, we've just got to be like everybody else.
Dash: But Dad always said our powers are nothing to be ashamed of! Our powers make us special!
Helen: Everyone's special, Dash.
Dash: Which is another way of saying no one is.
Advertisement:

The Incredibles is Pixar's sixth feature film, released in 2004, an affectionately parodic Decon-Recon Switch of the Superhero genre, happily lampshading on many conventions. Its plot bears a resemblance to Watchmen, although the tone is nowhere near as dark. That said, it's easily in the running for the darkest film Disney's ever been involved with—surpassed in number of onscreen deaths only by Pirates of the Caribbean—with tons of Black Comedy besides. It marks two firsts for the studio: their first with humans as the main characters and their first to be helmed by an out-of-studio filmmaker.

Following a court ruling finding the Superstrong Mr. Incredible culpable for damages and the resulting series of lawsuits, the Super Relocation Act was enacted and all superheroes have been forced into retirement. Mr. Incredible and the stretching Elastigirl are now just Bob and Helen Parr. They have a quiet life in the suburbs with an ordinary house, a normal job and 3 children: disruptive and superfast Dash, shy Violet (who can turn invisible and project force fields), and baby Jack-Jack, who seems to have no powers. In other words, they are a very rough equivalent of the Fantastic Four. They're not really happy with the situation, but they don't have a choice.

When Bob gets an offer from a mysterious woman named Mirage to relive his Glory Days and help out a high-tech facility gone wrong, he Jumps at the Call without telling his family. Soon, though, he gets in trouble, and finds he needs all the help his family can offer to help him save the day from a Diabolical Mastermind with an Evil Plan and a Killer Robot.

A sequel, Incredibles 2, was released in 2018, with Brad Bird once again in the role as writer/director. Like other Pixar movies, there was a comic book series published by Boom! Studios written by Mark Waid that continued adventures of the family, running from 2009-2010.

The Incredibles played in theaters along with the Pixar short Boundin'. The DVD spinoff shorts "Jack-Jack Attack" and "Mr. Incredible and Pals" have their own pages.

The Incredibles provides examples of:

Putting on that belt must take forever.

Before the release of The Incredibles, a teaser trailer that shows Mr. Incredible testing his belt buckle was made. The teaser was released during screenings of Finding Nemo in May 2003.