Spoilers for both The Incredibles and Incredibles 2 will be left unmarked here. You Have Been Warned! 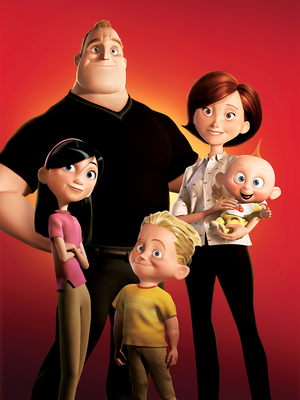 Click here to see the Parr family in Incredibles 2 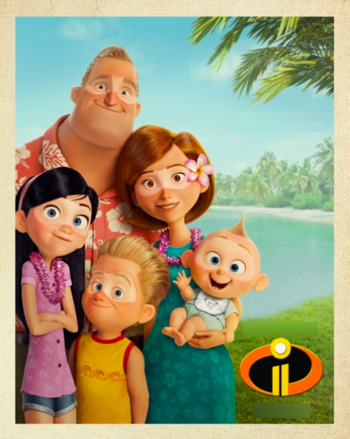 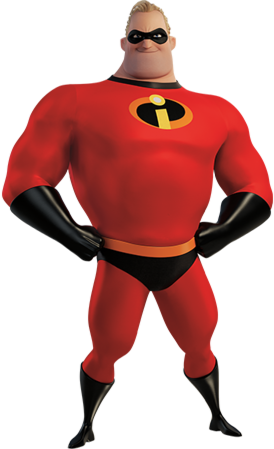 "Every superhero has a secret identity. I don't know a single one who doesn't. I mean, who wants the pressure of being super all the time?"
Voiced by: Craig T. Nelson (movies), Richard McGonagle (games)
"No matter how many times you save the world, it always manages to get back in jeopardy again. Sometimes I just want it to stay saved! You know?! For a little bit. I feel like the maid: "I just cleaned up this mess! Can we keep it clean for, for 10 minutes?! Please?!""

Mr. Incredible is a super-hero from the Golden Age. He marries Elastigirl shortly before they're forced to retire and enter the "Super Relocation Act" by a new law banning vigilante superheroics, legislation that was inspired in large part by the collateral damage resulting from Mr. Incredible's superheroic activities. 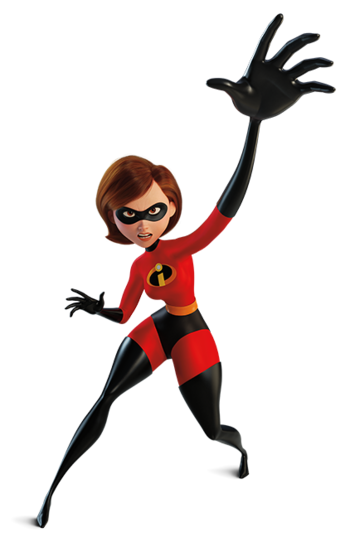 "Of course I have a secret identity! Can you see me in this at the, at the supermarket? Come on! Who'd wanna go shopping as Elastigirl? You know what I mean?"
Voiced by: Holly Hunter (movies), Elizabeth Daily (games)
"Settle down? Are you kidding? I'm at the top of my game! I'm right up there with the big dogs! Girls, come on. Leave the saving of the world to the men? I don't think so. I don't think so."

Mr. Incredible's wife, Elastigirl is the mother of three children. Ever since the government forced her to stop doing any superheroics, she has problems getting her family of supers to fit in.

The oldest child in the Parr family. Violet has a crush on popular student Tony Rydinger, but she is too shy to talk to him. She has the power to create force fields and turn invisible. 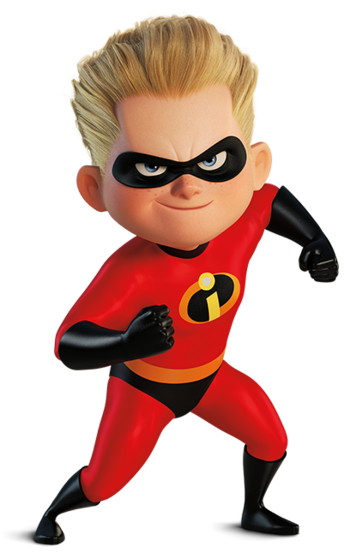 "Look! I'm the Dash!"
Voiced by: Spencer Fox (first movie), Huck Milner (second movie)
"You always say 'Do your best', but you don't really mean it. Why can't I do the best that I can do?"

The middle child of the Parr family. He has super-speed powers and gets into trouble at school because he wants to play sports. His mom insists that competing in sports events would be cheating, even if he only won by a little. 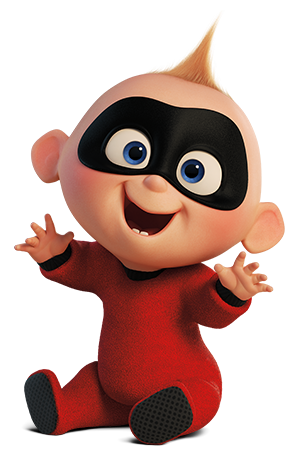 The youngest member of the Parr family, Jack-Jack has not learned how to talk and has not shown many signs of possessing super-powers. 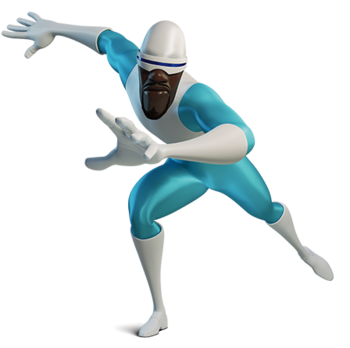 "I don't see anyone from the old days, Bob. Just you. And we're pushing our luck as it is."
Voiced by: Samuel L. Jackson (movies), Philip Lawrence (The Incredibles: Rise of the Underminer), Thierry Desroses (European French)
"Super-ladies, they're always trying to tell you their secret identity. Think it'll strengthen the relationship or something like that. I say, "Girl, I don't wanna know about your mild-mannered alter ego or anything like that." I mean, you tell me you're, uh, super-mega-ultra-lightnin' babe? That's all right with me. I'm good. I'm good."

A retired superhero with ice-based powers, and Mr. Incredible's best friend from the old days. Unlike Mr. Incredible, he's settled into civilian life and only reluctantly joins him on his attempts to relive the Glory Days. 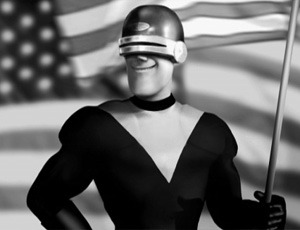 Gazerbeam, real name Simon J. Paladino, was a former superhero. He appears briefly at Mr. Incredible and Elastigirl's wedding. The disappearance is noted by the papers which draws Mr. Incredible's attention. 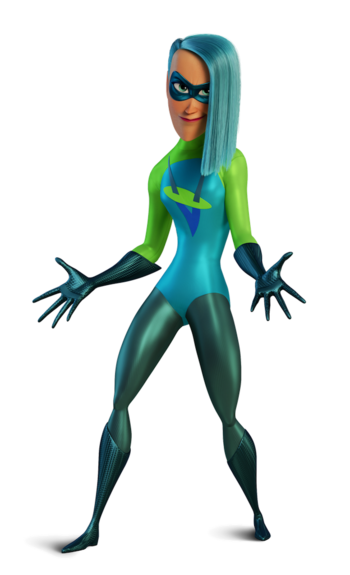 "I felt like an outcast before, but with you being... well, you, I feel like... yay me!"
Voiced by: Sophia Bush

A super-heroine brought in by Winston Deavor and a huge fan of Elastigirl. Her superpower is creating portals.

A group of supers who were in hiding until Winston Deavor found them and convinced them to sign on. Voyd has her own section because of her increased screen time. The other members are Screech, an owl-based super with a sonic scream; a telekinetic named Krushauer; Reflux, who can spew lava; He-letrix, who has electrical powers; and an immensely strong and durable woman named Brick.

Some of these superheros were briefly seen in action during Edna's Death Montage. Others were glimpsed as photos when Mr. Incredible was reviewing the Supers killed during the prototyping of the Omnidroid. Many of them have NSA profiles shown in the DVD extras.

"See, now you respect me.
Because I'm a threat!"
Voiced by: Jason Lee
"All I wanted was to help you [Mr. Incredible]. I only wanted to help! And what did you say to me?... "Fly home, Buddy. I work alone." It tore me apart, but I learned an important lesson: you can't count on anyone, especially your heroes."

The Big Bad of the first movie. Once Mr. Incredible's #1 fan with a gift for creating inventions, Buddy Pine turned to evil after his attempt to become his hero's Sidekick ended in disaster. Building the Omnidroids, Syndrome enacts an elaborate plan to gain the recognition he felt he lost when Mr. Incredible rejected him. 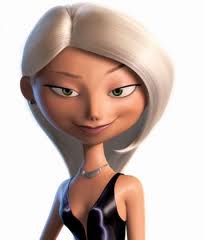 "He's attracted to power. So am I. It's a weakness we share."
Voiced by: Elizabeth Peña
"He's not weak, you know. Valuing life is not weakness. And disregarding it is not strength."

A mysterious and alluring woman who approaches Mr. Incredible with a chance to use his powers once again through confidential hero work, only to be revealed as Syndrome's henchwoman. 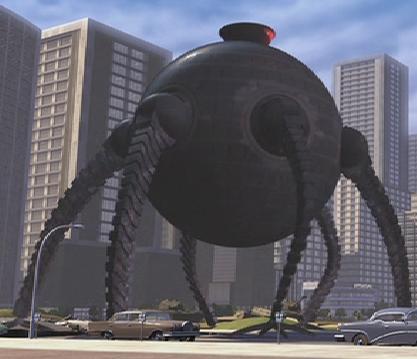 "It's bigger! It's badder! Ladies and gentlemen, it's too much for Mr. Incredible!"

The Omnidroids are a series of battle robots built by Syndrome as part of his plan to pose as a hero. It went through several prototype phases and tested against Supers. If the Super destroyed it, the Omnidroid was revised until it could terminate the Super. The process repeated until it was used to battle Mr. Incredible and that final design was then unleashed on the city as part of Syndrome's Engineered Heroics plan. 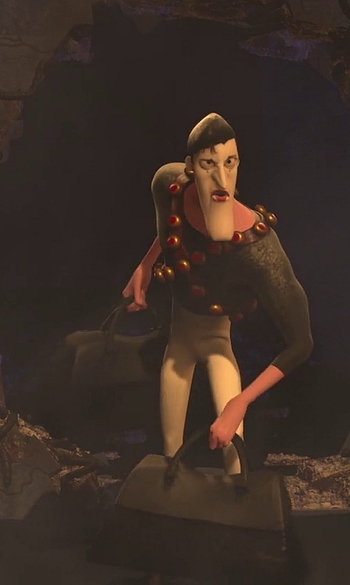 Bomb Voyage was a recurring enemy of Mr. Incredible. He is a bomb-wielding villain dressed like a mime who speaks French. He only appears in the prologue of the first film, but it's his action of attaching a bomb to Buddy's cape that leads to a large portion of the lawsuits that eventually drove supers into hiding. 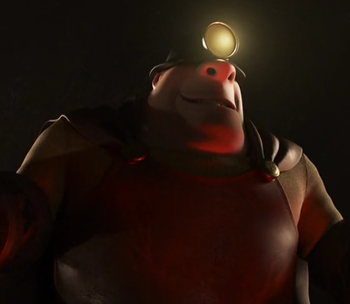 "Behold the Underminer!! I am always beneath you, but nothing is beneath me!!"
Voiced by: John Ratzenberger

The Underminer is a supervillain appearing at the very end of the first movie, prompting the Parr family to spring into action and serving to demonstrate that they are able to operate in public again and will go on to have many adventures while fighting various enemies as a superhero team.

Voiced by: Catherine Keener
"People will trade quality for ease every time."

Winston Deavor's sister and a tech expert who has never met a problem she can't solve. 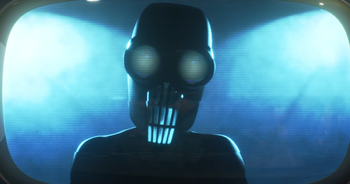 The primary antagonist of Incredibles 2, the Screenslaver is a supervillain who specializes in hypnotic visual weaponry.

This folder focuses on The Scapegoat for the Big Bad.

"I never look back, dahling. It distracts from the now."
Voiced by: Brad Bird
"'Supermodels'—ha! Nothing 'super' about them. Spoiled, stupid little stick figures with poofy lips who think only about themselves. Feh! I used to design for GODS..."

A diminutive but brilliant fashion designer who, back in the day, designed costumes for superheroes.

Mr. Incredible's immediate supervisor at Insuricare. He is a short-tempered (and short) man who often butts heads with Mr. Incredible about his graciousness to customers' claims. 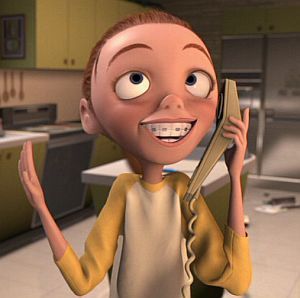 "I can totally handle anything this baby can dish out!"
Voiced by: Bret Parker

The babysitter hired to watch Jack-Jack during the events of the movie. She finds the process...unexpectedly difficult. 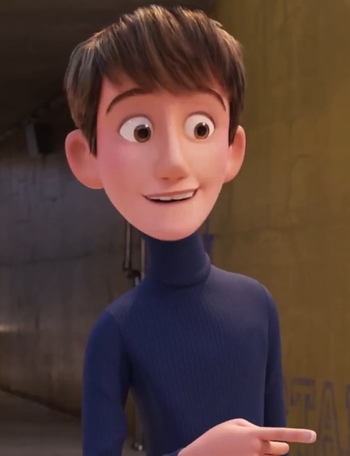 A popular student at Violet's junior high. She has a crush on him. 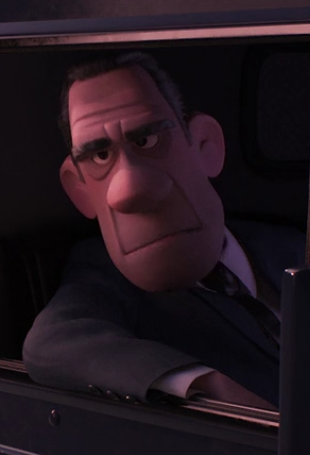 Rick Dicker is an old friend of Mr. Incredible's - presumably his Friend on the Force back when the government provided assistance to superheroes. Years later, his department's function has been changed to keeping superheroes inactive and anonymous.

A raccoon who hangs around the house Winston gives to the Parrs and serves as Jack-Jack's first nemesis. Their fight is the reason Mr. Incredible knows that Jack-Jack has superpowers.

Although unnamed in the film itself, the track on the soundtrack that Michael Giacchino wrote for the fight between Jack-Jack and the raccoon is called Rocky vs. Jack-Jack. 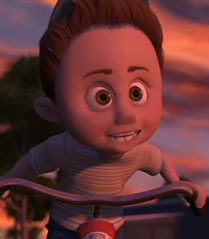 "Oh man, that was totally wicked!"
Voiced by: Nicholas Bird

A neighboring boy of the Parrs who tends to witness their incredible feats.

Snug Porter
An Ace Pilot that was responsible for taking Elastigirl on her superhero missions in the Golden Age and the one that lends Elastigirl his fastest jet. In the movie he only appears as a disembodied voice on the phone as Elastigirl looks at an old photo of them together. In an earlier version of the film, he was given a bigger role, but he never made it past the storyboards.
Honey Best
Voiced by: Kimberly Adair Clark
"'Greater good?!' I am your wife! I am the greatest good you are ever gonna get!"

The wife of Frozone. Never actually on-screen, although we do hear her. 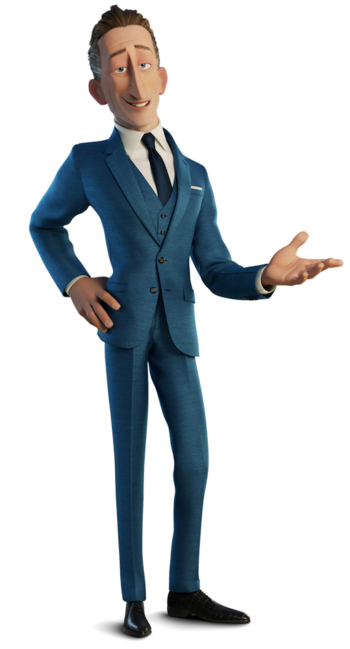 Voiced by: Bob Odenkirk
"It's time to make some wrong things right."

A rich tycoon of a world-class telecommunications company who supports Supers and wishes to bring them back into the spotlight.

A suicidal man who sues Mr. Incredible for injuring him while rescuing him.
Tommy
Voiced by: Robert Clotworthy

A talk-show host who appears in the second movie. Both of his attempts to interview Elastigirl are interrupted by Screenslaver.

Doc Sunbright is an ally for the super-community as a whole from The Incredibles comic book series. He's something of a mad scientist and was the one who helped Jack-Jack be born safely. In fact, it's implied he's the only person who can deliver potential super-babies safetly.

Mezmerella is a villain from The Incredibles comic book series. As her name implies, she is a master of hypnosis.

Elastigirl's arch nemesis and the Big Bad of the comics. Having a supernatural ability to always achieve victory, Xerek has accumulated power and wealth that has let him become the primary kingpin behind an assortment of super criminals.

A robot from the future trying to devolve humanity to conquer it.

One of Elastigirl's old enemies. Moves next door to the Parrs in order to get her revenge on Elastigirl.

A boy who moves next door and Violet's love interest. Moves far away at the end of the first arc, but, thanks to a teleporter, stops by for a visit later on, and fashions himself into a super using his mom's old potions.

The main antagonist of the comic arc of the same name. He commits various crimes and even steals Dash's powers.