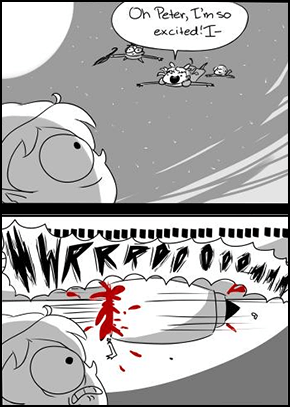 Like Helicopter Blender but with running jet engines. The key difference is that a living being is sucked into a jet engine and doesn't come out in pieces afterwards (unless those pieces are really, really tiny) — it gets reduced to a Pink Mist. Likewise, a non-living object comes out in tiny shiny shreds. Due to how horrific this is, characters who die from this almost always have a Cruel and Unusual Death.

Very definitely a Truth in Television, as the jet engines most people are familiar with are the high-bypass turbofan engines on commercial airliners, which draw in a tremendous volume of air

and thus produce hurricane-force winds in the region near the engine inlet. The spinning item at the very front of the engine is a very-unforgiving ducted fan made of titanium blades spinning at thousands of RPM, which will rapidly render an animal as large as a person into something akin to liquefied beef. Ground crew that must work near active jet engines must keep anything not tied down (including themselves) some tens of meters away, outside the hazard zone, or else risk becoming, well, ground crew.

Any type of foreign object that strikes an aircraft (either the airframe or the engines) and damages it is called foreign object damage, of which the most typical type are "bird strikes"

, although ice/hail damage is also common. To a certain limit, airliners must be able to strike birds, and engines must be able to ingest birds, without causing the airframe or engine to fail. In the case of engines, this means the engine must be able to be struck by a bird up to a particular size, blend it, and pass it out the exhaust (usually by bypassing the engine's core) all without damaging the engine to the point it loses function. In essence, part of the purpose of the fandisk is being specifically designed to blend objects, if only to protect the rest of the engine. It's worth pointing out that an airliner is also intended to be capable of a controlled landing with one of its engines non-functional (assuming it doesn't explode or anything), so even a larger impact might be survivable, but it's still a risk no one wants to take. In fact, larger birds such as geese have been known to damage airliner engines to the point of failure (as with the US Airways Flight 1549

incident in 2009). This is where the trope tends to deviate from reality, as typically when it is used the jet engines continue functioning with no problem whatsoever after consuming a full-sized human or more.

It must be noted, though, that the aircraft design includes tuning airflow around aircraft so that incoming objects are drawn away from fragile parts. As a result, despite dirt flying well above the height of an airplane, it flies past the engine inlets. Ideally, incoming birds should be redirected away from the engines.

Fun fact: the scientific term for remnants-of-bird from bird strike is "snarge", as it was probably the cleanest word to come out of the mouth of the first jet-engine mechanic to encounter it.

Might happen to some superheroes that fly a little too close to a plane. Especially when wearing a cape.