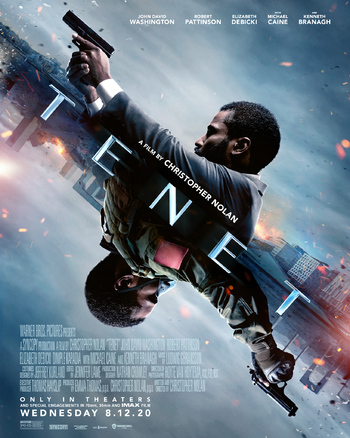 "You have to start looking at the world in a new way."
"All I have for you is a gesture, in combination with a word: 'Tenet'. Use it carefully. It'll open the right doors, but some of the wrong ones, too."
— Fay
Advertisement:

Tenet (stylized in all capital letters as TENET, formerly

TENƎꓕ) is a 2020 science fiction spy film, written and directed by Christopher Nolan. It stars John David Washington, Robert Pattinson, and Elizabeth Debicki, with Dimple Kapadia, Aaron Taylor-Johnson, Clémence Poésy, Michael Caine, Kenneth Branagh and Martin Donovan in supporting roles. It is also the first Nolan blockbuster, and his first film in 15 years, not to be scored by Hans Zimmer, as he was already committed to Dune (2021); Ludwig Göransson was chosen in his place.

Tenet follows an unnamed CIA operative (Washington) as he and his team go undercover in an opera house siege in Kiev, which ends with the team getting wiped out and the operative taking a cyanide pill before he can be forced by torture to talk...only to wake up some time later, officially declared dead. An organization has recruited the "Protagonist" for the aim of securing everyone's survival from, as he will learn, antagonists from the future. Now armed with one word — Tenet — and a goal that transcends national interests, the Protagonist must navigate his way through a twilight world of international espionage, gaining allies for a mission that will unfold in something beyond real time.

Tenet was originally scheduled for a simultaneous worldwide release on July 17, 2020, until the COVID-19 Pandemic caused Warner Bros. to start a series of incremental release delays, as well as scheduling an (also-delayed) 10th-anniversary rerelease of Nolan's Inception. It opened in 70 international territories on August 26th, with the US release starting out in select cities on September 3rd and a Chinese release beginning September 4th.

"Wake up the tropes."

It's the bomb that didn't go off. The danger no one knew was real. That's the bomb with the real power to change the world.