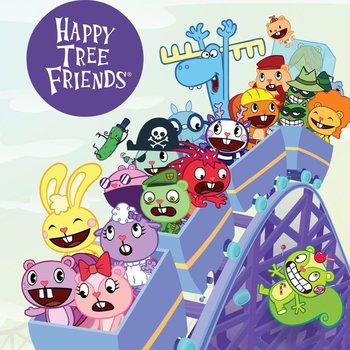 (1999-2016) is a series of web-based (and, at one point, televised) animated shorts and one of MondoMedia's longest-running shows. The series stars a cast of colorful adorable animals that live in a bright and happy world...

Actually, it's more like a candy-colored gorefest where each and every character is a Chew Toy (sometimes a Cosmic Plaything) doomed to suffer a nightmarish, gruesome, and absolutely disgusting demise. Expect to see a violent death at least Once per Episode, more often than not rife with Body Horror and/or painful injuries galore. It is one of the most prominent among series in wide circulation that Cross the Line Twice, since it's designed to horrify people to such extremes that we laugh. Subverted Kids' Show doesn't even begin to describe it.

After you pick up your jaw from the floor, you'll likely be laughing your guts out (not literally, though the show does do that a few times). It doesn't help that the Sickeningly Sweet characters and setting so perfectly emulate a number of children's shows (they even have Care Bears-esque hearts for noses) or that the poor critters are endlessly resurrected between episodes to die in new ways that even Kenny McCormick would wince at.

The series also has a really popular fan-made anime version.

Though the series wasn't officially declared ended or cancelled, no new episodes have been produced since 2016.

Other works in the Happy Tree Friends franchise:

Example of:
Tear Off Your Face