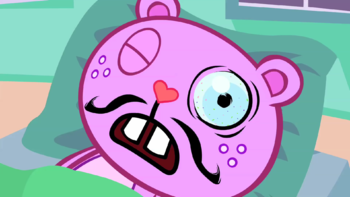 Happy Tree Friends offers plenty of opportunities for laughter (and not just at the Comedic Sociopathy of the cute little characters getting constantly splattered). Think of it as the Cute Cartoon version of Bloody Hilarious. There's a reason why the creators has sometimes described the show as a "comedic show that just happens to have lots of gore and violence".
Advertisement: