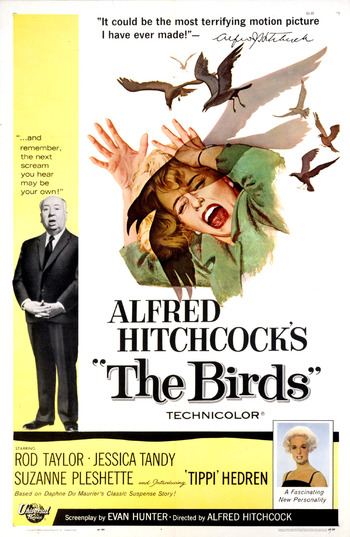 The Birds is a 1963 suspense/horror film directed by Alfred Hitchcock, based on the short story of the same name by Daphne du Maurier. The film's innovative special effects, soundtrack, and apocalyptic theme influenced later "revenge of nature" disaster films.

Melanie Daniels (Tippi Hedren) is a young San Francisco socialite. She decides to follow lawyer Mitch Brenner (Rod Taylor) to his home in Bodega Bay, California. She apparently picks the wrong time to visit. The birds of Bodega Bay are becoming increasingly aggressive and soon every human being around comes under attack, with Annie Hayworth (Suzanne Pleshette), a close friend of the Brenners, becoming one of the early casualties.

Unlike most other films of its era, The Birds does not have a music score or an ending in the conventional sense. The soundtrack was supervised by Bernard Herrmann; bird cries and wingflaps were played on an expanded Trautonium (called the Mixtur Trautonium) by Oskar Sala, assisted by German composer Remi Gassmann.

The screenplay was written by Evan Hunter. Ub Iwerks helped out with the special effects involving the birds. There was a made-for-TV sequel, The Birds II: Land's End (1994), with a new cast of characters (and Ms. Hedren gamely contributing a cameo as a shopkeeper). It fared poorly.

Type B. This movie could be seen as the Trope Codifier.

Type B. This movie could be seen as the Trope Codifier.