Film / The Bird with the Crystal Plumage 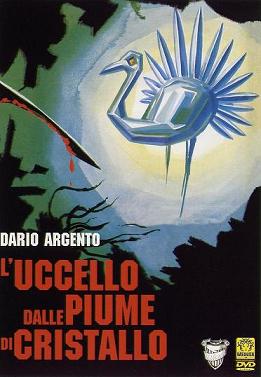 The Bird With the Crystal Plumage (L'uccello dalle piume di cristallo) is Dario Argento's debut as a film director, his first giallo film and the first film in his "animal trilogy". It was released in the year 1970. Ennio Morricone composed the soundtrack.

The plot follows American writer Sam Dalmas (Tony Musante), who has been in Italy with his girlfriend Giulia for two years, trying to get around writer's block. Walking the streets one night, he witnesses a struggle between a woman and a man in black in a gallery. As he tries to intervene, he is locked between the gallery's glass doors and can only helplessly watch the man run away as the woman is crumpled on the floor with a fatal wound on her stomach. He manages to get a passerby to call the police and the woman is saved in time. He finds out that there has been string of similar murders of women in the area, and begins doing some investigation of his own on the matter.