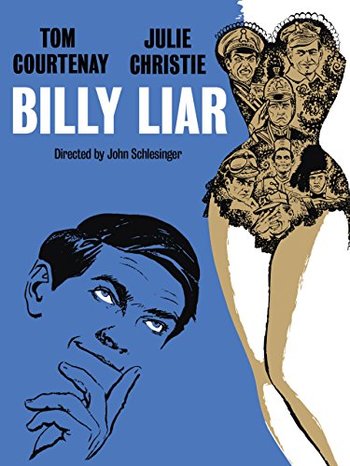 A 1963 British film directed by John Schlesinger, starring Tom Courtenay and Julie Christie. It is based on the 1959 novel of the same name by Keith Waterhouse, and the subsequent play by Waterhouse and Willis Hall. Waterhouse himself based the story on the short story The Secret Life of Walter Mitty by James Thurber.

Billy Fisher is a nineteen-year-old undertaker's clerk living with his parents and senile grandma in a cramped house in a provincial town in the early 1960s. Stifled by his overbearing family and his mind-numbing job, he yearns to escape to London to become a comedy scriptwriter. Meanwhile he retreats into a fantasy world of his own creation where he is the leader of the fictional country of Ambrosia. He also makes up tall stories about himself and his family which he struggles to reconcile with the real world. As a consequence he finds himself engaged to two different girls, both eager to meet Billy's parents. His real love however is Liz, the only person who really understands Billy, and the one person Billy feels able to confide in. Liz offers him a way out, but has Billy got the bottle to seize it?

Although superficially a comedy, Billy Liar is also a serious reflection on the dramatic social and cultural changes that shook up post-World War II Britain; changes whose ripples can still be felt in the second decade of the 21st century.

This film doesn't exhibit any of these tropes at all and anyway they're at the jeweller's for repair: