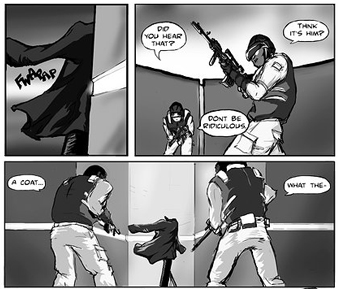 A character uses a decoy with their outfit or armor, or simply their hat, to distract enemies or to gauge how dangerous a situation is. Very likely to lead to Hat Damage for the latter.

Some situations requires the hat to be placed on a stick or held in a certain way to further the facade. For whole outfits, a mannequin or even a log may be used. Particularly skilled characters can execute the so-called "cicada husk" maneuvernote Japanese 空蝉 (utsusemi); named for the lifelike exuviae left behind when a cicada moults, which can even continue to cling to trees and simply Flash Step out of their clothes.

While a hat may be easily replaceable or fixed if damaged, if a character needs to use the clothes on their person, it may be problematic if damaged and needs to be worn again immediately.

In cases of Artificial Limbs or Powered Armor, Fake Arm Disarm or Animated Armor may be invoked alongside those tropes respectively.

Decoys used by a Cold Sniper in combat will often have a flashlight or similar lightsource that replicates the Sniper Scope Glint of their Sniper Rifle, often accompanied by a real or dummy weapon. These decoys are usually used to lure out enemy snipers or combatants by giving away their position and/or leaving them open to be sniped by the sniper in question or ambushed by one of the sniper's allies.

Compare Disguised Hostage Gambit and Decoy Getaway, where an actual person is used. Contrast Stripping the Scarecrow. Sister Trope to Paper-Thin Disguise. Sometimes used to set up a Sleeping Dummy. See also Jettison Jetpack Attack for when jetpacks or fuel tanks are used in a similar manner.