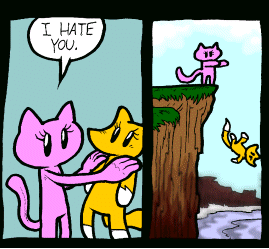 Purple Pussy was the infamous webcomic by Shmorky of The Flash Tub fame, and hosted on Keenspot. It ran from 2000 to 2005, and raised controversy when in 2007, one of its comic pages was blatantly traced and hung in an art show.

The protagonist in the comic would be Purple Pussy, a violent feminist cat who goes on zany adventures with her friends. The comic frequently experimented with various art styles, humor, and the occasional story arc, balancing out hysterically vulgar humor with surprisingly emotional moments. An internet classic.