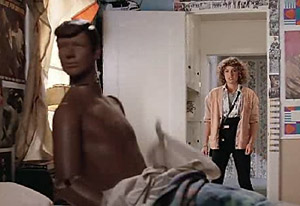 A character wants to sneak somewhere at night without being caught, so he or she stuffs the bed with rolled up sheets or pillowcases or something to make it look as though he or she is still in bed, maybe with a fake papier-maché head sticking out from the sheets and with some clothes on. Sometimes it works, sometimes it doesn't.

Bonus points if they use a tape recorder to add breathing/snoring.

One of The Oldest Tricks in the Book.

See also Bedsheet Ladder and Ninja Log. Sometimes, it is used to avoid being Slain in Their Sleep.