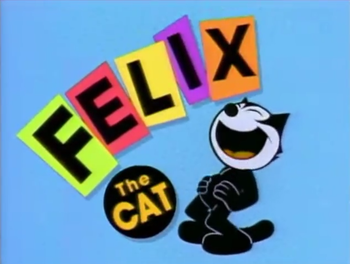 The second incarnation of the long running Felix the Cat cartoon series, directed by Fleischer and Famous animator and Otto Messmer protege Joe Oriolo, and distributed by Trans-Lux from 1958 to 1961.

While the series is a revival of the classic cartoon feline, there are considerable differences between it and the original B&W and color cartoons that preceded it, to the point where the similarities begin and end with Felix's name and design. The Felix of this series has a considerably different personality than the Silent era Felix, being more genial and youthful than the rascally Anti-Hero of the original cartoons. The art style, while as minimalist as ever, eschews the comic strip like aesthetic in favor of a more stylized UPA-esque approach to go in hand with its low budget, made-for-TV nature. A fantasy tone is still present, but virtually none of the urban surrealism or grey morality of the original cartoons are present, with the stories mostly being lighthearted good vs. evil stories aimed at children. Felix occasionally gets to use his surreal abilities from the silent cartoons, namely his Cartoony Tail, but they're downplayed in favor of using the benefits offered by a new introduction to the series, the Magic Bag of Tricks, a tool that can change into anything Felix needs at any time. The Oriolo revival scrapped the few recurring characters who appeared in Felix's past, but it also introduced several new players to the series, including the Professor (whose foolish obsession with stealing the Magic Bag or money drives many of the stories), Rock Bottom (Professor's thuggish, dimwitted crony), Poindexter (Professor's brilliant and genial, if occasionally bratty, nephew) and Master Cylinder (an evil cyborg and former pupil of Professor who rules over the moon as king and loves to kidnap Poindexter and try to take over or blow up the Earth), along with bit players like Vavoom (an impish kid with an extremely powerful voice) and Martin the Martian (an intrepid alien weilding a 4th Dimensional Cube who should not be confused with Marvin the Martian).

The series has some presense in comic books, but nowhere to the extent of the classic series. It also bears noting that years before this series made it to air, Joe Oriolo, who took over art duties of the comic books and newspaper comics by 1954 after Otto Messmer retired (who had already transitioned the comics into a Lighter and Softer direction by the 1940's and 50's), was starting to move the franchise into the style of this series, creating some overlap between the classic era and Oriolo era of Felix. The later Harvey Comics-distributed Felix the Cat comic books and Dell's short-lived 1962 Felix comic revival tied in to the TV cartoons and incorporated characters from Trans-Lux series into them. In the 1990's, Don Oriolo launched a short lived revival of the Oriolo series in the form of a comic book called The New Adventures of Felix The Cat, which ran for 7 issues, with another comic series, Felix the Cat in Black and White running alongside it for 8 issues. Many oneshot comics based on the series would follow in the years after.

To say the least, this part of the series is by far the most well known version of Felix the Cat and continues to influence the rest of the Felix series, including the 90's revival The Twisted Tales of Felix the Cat. This take on the series is continued to this day under the watch of Joe Oriolo's son and former owner of Felix, Don Oriolo, and current owner Dreamworks Animation (who are in turn under the ownership of NBC/Universal).

Also see Felix the Cat: The Movie, Baby Felix and Friends and Felix the Cat Saves Christmas, which are all set in the same continuity as this series. An NES and Game Boy tie-in video game to this series was made by Hudson Soft and released in 1992 and 1993 as well.

Characters for this series can be found in their own section of the Felix The Cat character sheet.

Has a recap page here.

Tropes related to the Joe/Don Oriolo Felix Cartoons and Comics