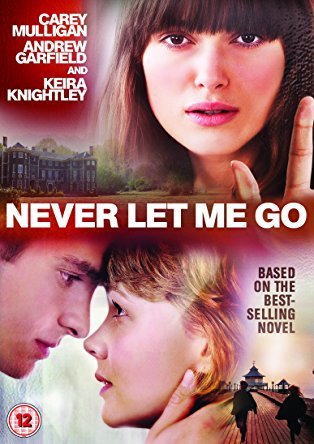 "I keep thinking about this river somewhere, with the water moving really fast. And these two people in the water, trying to hold onto each other, holding on as hard as they can, but in the end it's just too much. The current's too strong. They've got to let go, drift apart. That's how it is with us. It's a shame, Kath, because we've loved each other all our lives. But in the end, we can't stay together forever."
— Tommy
Advertisement:

Never Let Me Go is a 2005 science fiction/romance/drama novel by Kazuo Ishiguro, author of The Remains of the Day. The plot concerns three friends, Kathy, who narrates, Tommy and Ruth, who as children are students at Hailsham, an unusual boarding school in the isolated English countryside. As Kathy nears adulthood, the truth about Hailsham and its students is gradually revealed to the reader.

A movie adaptation was released in 2010 starring Carey Mulligan as Kathy, Keira Knightley as Ruth, and Andrew Garfield as Tommy.