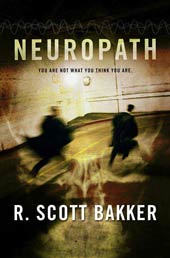 You are not what you think you are.
Advertisement:

Neuropath (2008) is a near-future Thriller by R. Scott Bakker, better known as the author of Second Apocalypse.

Professor of psychology Thomas Bible's life is turned upside down when the FBI arrives on his doorstep with reports of murders and gruesome experiments. The prime suspect is Tom's old college buddy Neil Cassidy, who has set out to prove a philosophical argument in the most shocking way possible...