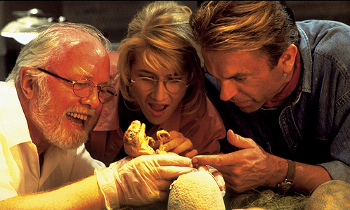 To be able to create intelligent life. Not just having a regular baby, but creating something through science or magic would be amazing.

In many works, Creating Life Is Bad; an ultimate show of scientific hubris. Western literature has its roots in a religious tradition in which the act of creation is the turf of God Almighty. Thus, Mary Shelley's Frankenstein not only became very influential, but also constantly interpreted through the lens of this condemning mindset.

Since then, more and more authors have been moving away from that old trope, instead moving towards this one — either defying the Frankenstein tradition or ignoring it completely. To qualify for this trope, the created life must be good and be treated as such. Of course, it must be created by humans or similar, not by deities in the traditional sense.

The creator is likely to be a Motherly Scientist or Deity of Human Origin.