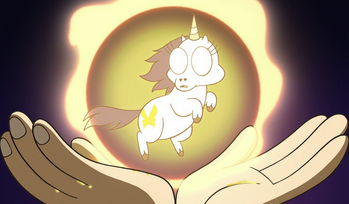 "Twas Gryffindor who found the way,
He whipped me off his head
The founders put some brains in me
So I could choose instead!"
— The Sorting Hat, Harry Potter
Advertisement:

Lots of characters come from when mommy characters and daddy characters love each other very much. This one didn't. They exist because A Wizard Did It.

Creating Life has always been messy, so many stories have characters simply springing into existence thanks to a magical spell, a wish, or a divine Hand Wave.

Whereas Pure Magic Beings and those Made of Magic are obviously created via magic, a being that's born of magic is not necessarily composed of magic following their creation.

This trope does not apply to Summon Magic or Resurrection Tropes, and is distinct from tropes where a character is created biologically, technologically, or somewhere in-between.

Related to Tulpa, which is a being created specifically by belief in them. Also see Golem and Our Homunculi Are Different.