Western Animation / Star vs. the Forces of Evil 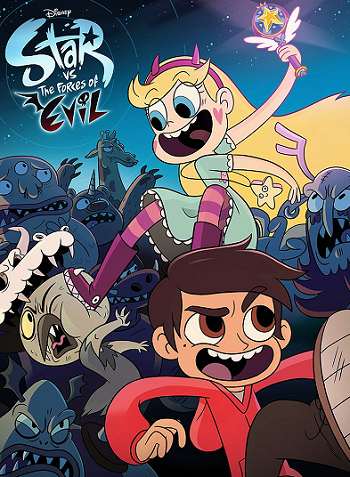 Star vs. the Forces of Evil is an animated series created by Daron Nefcy, former storyboard revisionist on Wander over Yonder. Premiering on March 30, 2015 on Disney XD, though the first episode was previewed on Disney Channel two months prior, it is the third animated show for Disney created by a woman.note The others are Sue Rose's Pepper Ann and Chris Nee's Doc McStuffins.

Star Butterfly (Eden Sher), a teenage Magical Girl princess, receives the family Magic Wand for her fourteenth birthday and, due to her extreme enthusiasm and inexperience, almost destroys the Kingdom of Mewni with it. Rather than send her to St. Olga's Reform School for Wayward Princesses as punishment, her parents decide to send her to a safe environment where she can learn and practice her new abilities: the Earth "Dimension", specifically Echo Creek, California, where she'll be living with the Diaz family as a foreign exchange student and attending high school with their adventure-seeking yet safety-minded son Marco (Adam McArthur).

Of course, Star and Marco aren't exactly stuck on Earth, despite what her parents intended: thanks to a pair of magic portal-creating scissors, the newfound friends find themselves having adventures both on Earth and throughout various dimensions, getting into hijinks, and fighting off evildoers who want the power of the wand for themselves.

While the series initially takes place primarily on Earth, it shifts the main location back to Mewni for its last two seasons. Alongside the shift in location comes a shift towards more dramatic and overarching storylines; now driven to take her role as future queen more seriously, Star finds herself having to navigate the secrets of her family's history and the long-standing racial tensions between Mewmans and monsters.

The series' third season premiered as a two-hour TV movie called The Battle for Mewni, which aired on July 15, 2017. This is the third animated TV movie to premiere on Disney XD, following Phineas and Ferb the Movie: Across the 2nd Dimension and the similarly repackaged Gravity Falls: Weirdmageddon. The series' fourth and final season premiered on March 10, 2019 on Disney Channel and ended on May 19.

An eight-issue comic book miniseries subtitled Deep Trouble began September 2016, but ended after four issues due to poor sales. A book entitled Star and Marco's Guide to Mastering Every Dimension, which gave additional information about the show's cast of characters, was released in March 2017. Another book, a defictionalized version of The Magic Book of Spells that details the history of Mewni and its many rulers, was released in September 2018.

"I think Earth is a pretty great place
That's saying something, 'cause I've been through outer space
I think it suits me, it's just my style
I think I'm gonna stay a little while
I think that strangers are just friends you haven't met
I'm blasting monsters and I never break a sweat
I'm really thinking I can call this place home..."
— Ending Theme, Seasons 1-2
Feedback