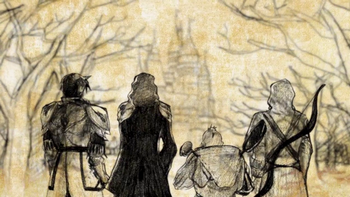 It is luck-based, what could go wrong?
"We, elementals, are leaving these lands as mankind history must be written once again. You, born human, half-devil, dwarf, and half-elemental: choose the future of your world. Choose to join the gods, the devils or the mortals. Bring back balance before everything cease to exist."
Advertisement:

Aventures is an RPG campaign organized between five french YouTubers: Mahyar as the GM, Krayn as Grunlek Von Krayn the dwarf, Bob Lennon as Balthazar Octavius Barnabé the fire mage, Fred as Théo De Silveberg the inquisitor, and Seb as Shinddha Kory the half-elemental rogue. In season 2, Fred plays a new character - Viktor Oppenheimer the paladin — after the supposed death of Théo in the season 1 finale.

The campaign has visuals provided by Roll20 as well as drawings of iconic scenes, and follows the team through a Heroic-Fantasy story starting with the presence of mysterious and fearsome spiders in the forest, though the chaotic nature of some of the players — namely Bob and Fred — is often a source of bigger problems for the team than the threat they're actually fighting against…

The show consists (for now) of three seasons and four mini-seasons done live. Departing from the fantasy setting, a Spin-Off show taking place in the Star Wars universe, named Starventures, was aired between season 2 and 3. The new cast consisted of Krayn as Tyzen the Zabrak pilot, Fred as Apple the furtive Twi'lek, Bob as 808 the droid and Seb as Gaarkkata the Wookiee. Another spinoff, this time focused on a modern Zombie Apocalypse called Les Survivants ("The Survivors") aired between season 3 and 4.

All the episodes can be seen on Bazar du Grenier

, Joueur du Grenier's secondary channel, and the uncut Lives can be seen on their Dailymotion page

, on which he hosts other Tabletop RPG game sessions (notably Call of Cthulhu) with a more rotating cast of guests.

Attempts were made to turn the series into an actual roleplaying game by editor Sans Détours, but legal complications with the company (revealed to have been guilty of refusing to pay royalties to multiple game creators, amongst other similar acts, eventually resulted in the editor being liquidated by a tribunal) put an end to the project, and soured its participants from the series, meaning that Aventures and its spin-off will very likely not see sequels for a long time. Here is a writeup

Now has a Character page and a Recap page.