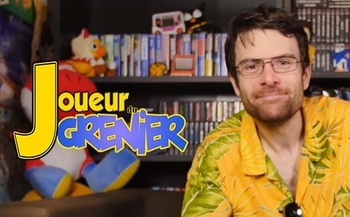 "The year is 2000 AD, and all Gaul is playing high definition consoles. All? No! In one small village, there is a gamer who still holds out against the invaders."
Advertisement:

("The Attic Gamer") is a French retro video games reviewer who plays mostly horrible (and mostly licensed) games since 2009, but also a few merely Nintendo Hard games, with his sidekick Sébastien Rassiat (a.k.a. Seb). The JdG team received a third member (Karim Debbache, host of Crossed) in early 2013, who mostly serves to write some videos' scenarios and occasionally makes a cameo. In late 2019, Sad Panda also joined the team as a manager for planning, casting and production, as well as doing behind-the-scenes videos on recent episodes.

He is basically the French equivalent of The Angry Video Game Nerd (although he developed his own style as the videos went on). Prone to getting very, very mad at his video games, he still goes through almost all them, much to his chagrin and to his viewers' amusement.

Being born in The '80s and having grown up in The '90s and the Turn of the Millennium, he also made several specials, nostalgic (or not) videos about animes, TV shows and other weird multimedia stuff that aired in those decades. With time his content has become more diversified and less focused on the classic AVGN-style angry videos, which are still present and popular but released far less frequently than before.

In 2012, he started a Spin-Off series titled Papy Grenier ("Attic Grandpa"), in which he plays an old bearded (and slightly sociopathic) storyteller who humoristically revisits classic cult games in a 5-6 minutes format.

In 2015, he and Seb launched a secondary channel called Bazar du Grenier ("Attic Bazaar"/"Attic Clutter"), where they upload all kinds of videos, ranging from Let's Plays to short movie reviews, future FAQs and blooper videos, and other miscellaneous mini-shows. A notable one is Aventures ("Adventures"), where they, along with other French YouTubers, play a tabletop RPG of their own invention (with visuals provided by the software Roll20). This channel also includes "narrative Let's Plays", mini-series where he and Seb don't just play a game but also enact a whole plot written around the game's mechanicsnote Hence why they choose games that don't have a predetermined plot, like survival, management or strategy games. − usually with a healthy dose of Black Comedy.

If you don't speak French, don't worry: all of his videos are subtitled in English on YouTube (though the quality of said subtitles is very hit-and-miss since they're fan-made).

A comic book telling his childhood by Piratesourcil came out in 2012 and ended in 2015 after four volumes.

In 2012, Fred and Seb made four informative videos

about Dragon's Dogma. While these videos aren't technically part of the series, they use the same humor that's featured in their more well-known videos.

The complete list of subjects brought up in Joueur du Grenier can be found on the recap page.