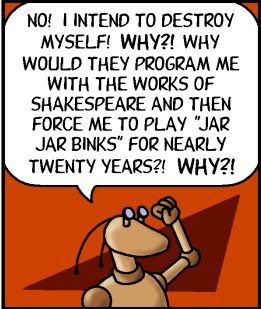 "Thank you for that "choice" role where I die in a fiery explosion right off the bat. Truly a character with all the rich complexity of Hamlet or King Lear."
— The Puttmaster, Comic Jumper: The Adventures of Captain Smiley
Advertisement:

The Classically Trained Extra is an actor, often on a Show Within a Show, who feels they're stuck in a lowbrow role that's somehow "below" them, agonizes over their talent being wasted, and aspires for greater things. Whether they're a has-been or an overly ambitious newcomer to acting, they tend to come off as an uptight blowhard, especially if they boast that they're a "classically-trained Shakespearean actor".

Particularly reviled roles seem to be a character on a science fiction program, the straight man on a Sitcom (a part many actors admit to hating, since it can be seen as standing there being "normal," while your co-workers get all the good laughs,) or the host of a broadcast TV kids' show. Bonus points for the last one, or any role where the Classically Trained Extra's personality (they're usually The Comically Serious) is cast against type. If they have sufficient contempt for the role, they might Hate The Job Love The Limelight. If they express that contempt to the kids who love their character, it's Nice Character, Mean Actor. For extra measure, add in a Contractual Obligation Project, in which the actor would not only despise the role because they feel it is beneath their talents, but also they were forced to be involved in the project.

Note, while the title is made to amplify the meaning of this trope, it happens whenever someone appears in a role that is really far, far below their ability and range. It may be a very important secondary role, but it is usually a pop culture type of production.

This trope is often Truth in Television, as even great actors can't always be picky about roles, as a side effect of skill not very often translating into popularity. This may even lead into Magnum Opus Dissonance if the work they sign up for outshines the popularity of the classical works they've preferred working on. This trope, however, can be subverted by One for the Money; One for the Art, where the actor (at least verbally) sets aside their personal feelings towards the quality of the project and uses the experience, connections, and money for projects that they would really enjoy doing.